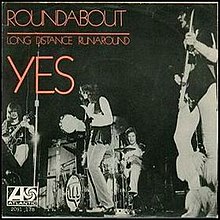 Songs I like- by Artist’s I Don’t- “Roundabout” by Yes.  I am not a fan of progressive rock- and while I can would have to acknowledge that Yes – is near or at the top of the list of the best progressive rock bands- that doesn’t mean I care for them. I once years ago saw their box set on sale for $5- and I am a sucker for box sets- but I still passed on that one. My brother has recently developed a liking to this band-which kind of concerns me since he has over this 50 years tended to like music that passes the Hans stamp of approval. Anyway- I do like Yes’s signature song- Roundabout- maybe its because I like roundabouts. The song was written by Jon Anderson and Steve Howe after their tour had traveled from Aberdeen to Glasgow and encountering a number of roundabouts- Steve Howe claimed 40 or so. Roundabout was on Yes’s- Fragile album- and released as a single where it peaked at #13 on the Billboard Hot 100 in 1971.. It became a standard play at nearly every Yes concert afterwards.