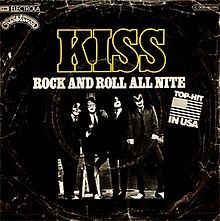 Songs I like- by Artists I Don’t- ‘Rock and Roll All Nite”-by Kiss. I have no use for this group- 99% make up 1% talent. They are playing tonight in nearby Pittsburgh- I wouldn’t walk across the street to see them even if they paid me. But- I do like two Kiss related songs- from back in the late 70’s when they released their solo albums- on the same day- Ace Frehley’s “New York Groove”- I still have the single I bought and the album I later bought from the $1 bin at a department store named Harts.

Rock And Roll All Nite- is probably Kiss’s signature song- it is [from what I have read] their concert closer over the years. It was first released as a single in 1975 and only went to #68- that was the studio version- later in the year they released a live version of the song and it took off- peaking at #12.