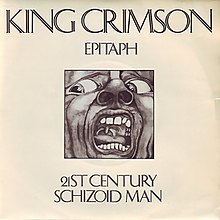 1969 Song of the Day is- ’21st Century Schizoid Man’- by King Crimson -it is the first song on the first album by King Crimson “In The Court Of The Crimson King.” The lyrics were written by Peter  Sinfield and the music by Robert Fripp, Michael Giles, Greg Lake and Ian McDonald- all band members. The song is sung by Greg Lake and clocks in at 7:20. The song is a combination of heavy metal, jazz-rock and progressive rock. Guitar World listed Robert Fripp’s guitar solo at #82 on their 100 Greatest Guitar Solo’s list. Former UK Prime Minister Tony Blair is a big fan of the song. The song- makes references to the war in Vietnam- a big topic in late 60’s rock music. 21st Century Schizoid Man- their first song- remains King Crimson’s signature song. I don’t care for progressive rock music but this is a pretty good album. Great album cover.