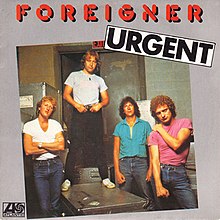 Songs I Like By- Artists I Don’t– “Urgent”- Foreigner. While I can’t say I hate Foreigner I can’t say I have ever liked them at all either- except for this gem- Urgent. In high school everyone it seemed like the same boring bands- The Eagles, Boston, Kansas, Foreigner- well a lot of people all over liked these bands and Foreigner sure did sell a lot of records and they had a lot of hits- but I always thought them to be part of the corporate rock scene. After all one of their champions was Rolling Stones founder Jann Wenner.  Their music seemed to me to be background music. I’ve all the hits a million times how could you avoid them? At that time I was a big radio listener and they were on the pop and rock stations. Urgent though is great- maybe it’s the Junior Walker saxophone solo,  the new producer they went to Mutt Lange and an unknown at the time Thomas Dolby on the synthesizer. The sound of this song is great. Urgent was on Foreigner’s 1981 album 4- and the song peaked at #4 on the Billboard Hot 100.