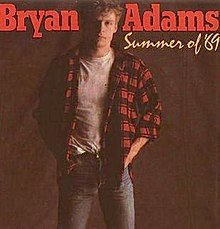 Songs I like by artists I Don’t- today goes north of the border to Canada and Bryan Adams. Bryan Adams has had in his career 22 Top 40 hits in the United States [and a lot more in his native land} including four which went to #1. For the life of me I have never understood his popularity. He is not an artist that I dislike- as I wrote about Huey Lewis his music is ‘just there”- kind of background elevator music. Inoffensive- routine- pedestrian. But there is one song that when I hear it on the radio I crank the radio up a few notches- that song is “Summer Of ’69’ his Top 5 hit from 1985. The song was co-written by Adams and his longtime writing partner Jim Vallance and it was a difficult process- at first they didn’t think what they had was strong enough to even made the album Adams was making- but they kept working on it- and were happy with the results at the end. There is a dispute by the two authors as to what the song is about- Adams has said it was about sex and making love in the summer time-  whereas Vallance-says the song is about the summer of ’69 when he was seventeen [ Adams was only 9 in the summer of ’69} I have always heard it though Vallance’s interpretation.

I was eight in 1969 and we were living briefly [for a couple years} out on a farm in the country. When I hear this song it takes me back to that time. I look at the time as idyllic- although I know for my parents it wasn’t. It was probably the most difficult time in their lives.  I was eight without a care in the world. My parents had in addition to me my two year old sister and one year old brother- and the times were tough financially.  I was eight- I was sort of aware of all this but there was food on the table and I was wanting for nothing that I didn’t have. I was a baseball obsessed kid and in the summer of ’69 was listening to baseball on the radio every night and wondering the farm and exploring the surrounding woods during the day and playing baseball with a couple friends. It as all good times. We moved to town in the fall of ’69 and in the fifty years since I have driven past that old farm countless times- and there have been times I have wanted to stop. Of course there were people who were living there- maybe if I knocked on the door and explained they wouldn’t mind me walking around for a few moments- but I know even if they sent me a written invitation to drop in- even walk around inside the house and all over the farm it is best to let the great memories remain memories. I know at 58 it wouldn’t be the same as it was when I was eight.

More than just the nostalgia I love the song- it stands out from everything else Adams has ever done.