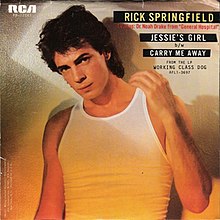 Songs I like-by Artist’s I Don’t– Jessie’s Girl by Rick Springfield. A couple weekends ago I heard Jessie’s Girl on the radio and that is where I thought of writing a little on the subject of songs I like- by artists who I don’t. Now Rick Springfield isn’t someone I actively dislike- he generally has never registered on my radar. He had seventeen Top 40 hits- all but one were in the 80’s- when I actively listened to pop radio- so I have heard his hits and nothing else- but figure that  is more than enough. I can’t say I liked any of them except- I did like his biggest hit and his only #1- Jessie’s Girl from 1981. It was one of the slowest rising singles to reach #1- taking 19 weeks to get there- and it was the #1 song when MTV came on the air- August 1, 1981. It is in my opinion a great pop song. The story of the song-was based on a real story- he came up with Jessie because the girl once was wearing a jersey of LA Rams receiver Ron Jessie.  Below is Springsfield on writing Jessie’s Girl.

“I don’t know her name. It was a brief relationship I had when I was making stained glass for a while. I was going to a stained glass class in Pasadena, and I met this guy and his girlfriend. I was completely turned on to his girlfriend, but she was just not interested. So I had a lot of sexual angst, and I went home and wrote a song about it. Then about four months later I stopped going to the class and lost contact with them. The only thing I remember is his name was Gary, so I changed the name, because ‘Gary’ didn’t sing very well. But the whole thing is absolutely what I was feeling. He was getting it and I wasn’t, and it was really tearing me up. And sexual angst is an amazing motivator to write a song. Actually, Oprah’s people tried to find her, and they got as far back as finding the stained glass guy. I couldn’t remember his name, but I said it was late ’70s; they found him, and he had died two years earlier, and they’d thrown all his papers out a year after that. So we missed finding out who she was by a year.

Back in 2012- I saw Rick Springfield- no not in concert- but we were on vacation and in Deadwood, South Dakota one day- and Springfield was playing somewhere in town that night- saw him on the street that afternoon.