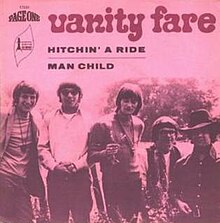 1969 Song of the Day- “Hitchin’ A Ride”- Vanity Fare. Vanity Fare was a band from the United Kingdom- and “Hitchin’ A Ride” which was released in 1969-became a hit in early 1970- reaching #16 in the UK and did even better on the Billboard Hot 100 in the US- peaking at #5 and selling a million copies. The song -written by Mitch Murray and Peter Callander was about- what it sounds like a young man hitching a ride without any money. This duo of songwriters Murray and Callander- also can be blamed for such travesties as Billy Don’t Be A Hero and The Night Chicago Died. Callander was also a co-writer on Wayne Newton’s “Daddy Don’t You Walk So Fast”- all three of the above mentioned songs have made my Worst Hits list. Compared to those this song is a classic. To be fair it isn’t bad.

Vanity Fare was not a one -hit wonder- they previously had a #12 hit with Early In The Morning- then Hitching A Ride followed it and that was it. They are still around today as a group.