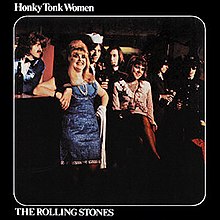 The Rolling Stones Song of the Day is- Honky Tonk Woman. Honky Tonk Woman written by Mick Jagger and Keith Richards would be one of their biggest ever hit singles-released on July 4, 1969. It was a stand alone single- not included on Let It Bleed {neither was Jumpin’ Jack Flash- how much greater Let It Bleed would have been if you tack those two singles on }  Honky Tonk Woman went to the top of the singles charts in both the United States and United Kingdom and is of course an essential on The Stones concert set lists ever since. Rolling Stone magazine ranked it #116 on their 500 Greatest Songs Ever list.

The setting for the song is Memphis, Tennessee [ where Rock and Roll was born at 706 Union Avenue} and that dancing girl is most likely a prostitute. Mick and Keith wrote the song while they were staying in Brazil in early 1969. A few months after the singles release they did a country version of it called Country Honk on Let It Bleed which isn’t bad but of course it can’t top this great rock and roll single. A song every bar band should know.

Honky Tonk Woman has been a much covered song over the years- Joe Cocker, Rick Nelson, Sir Elton, Hank Jr, Billy Joel, The Killer Jerry Lee Lewis, Waylon Jennings, Billy Joel and many others have given it a go. Weird Al even did a parody of it.