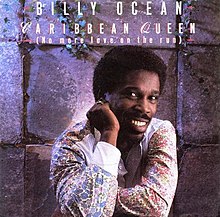 Hans Worst Hits of the 80-s “Caribbean Queen” by Billy Ocean. I include this in the Worst Hits series because it is such a blatant rip-off of a song that had been released just over a year earlier- a little ditty called Billie Jean by Michael Jackson. Both Billie Jean- Michael’s greatest ever single and Caribbean Queen went to #1. It was Ocean’s first hit. I think his later hit “Get Out Of My Dreams Get Into My car” is far worse than “Caribbean Queen” but If pressed to pick one from Ocean- I will go with Caribbean Queen because he and co-writer Keith Diamond ripped it off from Billie Jean.  Billie Jean was still being played all over the radio when this came out. I can’t believe there was no lawsuit. Of course it paid off Ocean won a Grammy for this song Best Male R&B Vocal Performance. Ocean would have 3 #1 hits in the mid 80’s before fading back into obscurity. Terrible sounding record too- hate that production but it went to #1 who am i to argue?