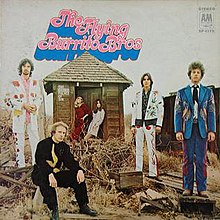 Hot Burrito #1 is on the Flying Buritto Brothers The Gilded Palace Of Sin album. It was written by Gram Parsons and Chris Ethridge about Parsons  break-up with his girlfriend Nancy. It is sung by Parsons. Parsons was one of the founders of Americana music-and wouldn’t live to see what a huge influence he became- he didn’t even make it to the ’27 Club” dying at 26.