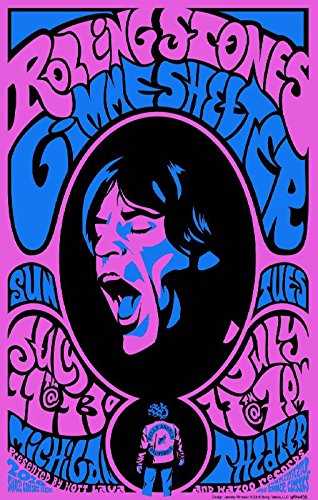 The Rolling Stones Song of the Day is- Gimme Shelter. Gimme Shelter is the first song on The Rolling Stones Let It Bleed album which was released almost a year to the day after their previous album Beggars Banquet which was released 12.6. 68- Let It Bleed 12.5.69. Gimme Shelter was the perfect lead off track for an album released in the final month of the 1960’s- the world was in turmoil and so were The Rolling Stones. The stones founder Brian Jones behavior was becoming more and more erratic and he was basically worthless to the group by 1969. He would be fired by the group and replace by Mick Taylor- and Jones would be dead by mid- 1969. Taylor would only appear on a couple of the Let It Bleed tracks- he wasn’t on Gimme Shelter. The song was written by Mick Jagger and Keith Richards- influenced by the unrest going on in the world at the time. It was a violent era- Vietnam, race riots, Charlie Manson, assassinations etc.. Gimme Shelter one of the best and most famous of Stones songs- was never released as a single. Mick later said of the song. “That song was written during the Vietnam War and so it’s very much about the awareness that war is always present; it was very present in life at that point. Mary Clayton who did the backing vocals, was a background singer who was known to one of the producers. Suddenly, we wanted someone to sing in the middle of the night. And she was around. She came with her curlers in, straight from bed, and had to sing this really odd lyric. For her it was a little odd – for anyone, in the middle of the night, to sing this one verse I would have been odd. She was great.”

The music site- acclaimedmusic ranks Gimme Shelter the #1 song of 1969. Ultimate Classic Rock ranked it the #1 Rolling Stones song. I don’t know if it was the best song of 1969 or the greatest Stones song- but it certainly is a contender for both those lists. The song has been used in three Martin Scorsese films.