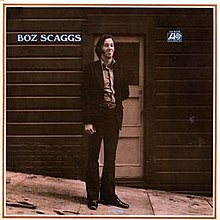 1969 Song of the Day- “Loan Me A Dime” by Boz Scaggs. Scaggs had released an album in 1965 that went all but ignored- then spent a couple years with The Steve Miller Band- before leaving and making his self-titled second album. Loan Me A Dime is the most notable song on that album. Loan Me A Dime was written by a bluesman named Fenton Robinson as Somebody Loan Me A Dime in 1967. Scaggs cover on his album comes in at just under 13 minutes and features guitar legend Duane Allman playing the slide and the Dobro. The other musicians on the song- and album weren’t too shabby either- the Muscle Shoals Sound Studio players. What makes the song is the musicianship displayed. Boz Scaggs was still years away from his pop masterpiece Silk Degrees album. The Fenton Robinson ‘Somebody Loan Me A Dime” would be used in the Blues Brother movie-it is playing on the radio when Jake Blues is being transported and paroled.