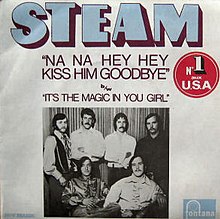 The success of the song is one of those crazy stories where a DJ in Georgia played the song- and got flooded with requests to play it again and then other stations picked up on it and then Mercury Record heard what was happening and gave it the needed push and the next thing you knew – you had a #1 record. Steam would put out an album in 1970 and that was it.

In 1977 the song took on a new life as a sports anthem. At Comiskey Park in Chicago at White Sox games their organist Nancy Faust began to play the song when the White Sox would knock the opposing pitcher out of the game and the fans picked up on it and would sing the chorus. The song has not only become a sports anthem but has been used in the political arena also.

Na Na Hey Hey Kiss Him Goodbye- has been covered by The Supremes, The Belmonts, The Dave Clark Five, Donna Summer did a disco version of the song and most recently the song has been sampled by a few different artists. Bananarama’s remake in 1983 was a Top 5 hit in the UK but failed to chart in the US.