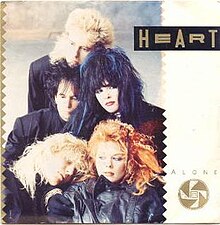 Hans Worst Hits of the 80’s- “Alone”- Heart. I promised yesterday that I’d leave Canadian artists alone for a while. OK- I have gone south of the border- the Wilson sisters were from the Seattle area.  First off- I liked the Heart of the 70’s-to early 80’s- they were a pretty good rock band- I wasn’t someone who went out and bought their albums but I enjoyed all the hits they had on the radio-they were not a hit making machine but they made good music. Plus like every American teenage boy at the time I had a crush on Nancy Wilson. Their biggest hit in the 70’s was Magic Man their ode to Charles Manson [ok not really but let’s say it was] which went to #9, some of their singles seemed like bigger hits because they received a lot of rock radio airplay- Crazy On You, Barracuda, Little Queen, Kick It Out, Heartless, Straight On, Dog And Butterfly, Even It Up all good stuff. Then in the early 80’s- they weren’t even getting minor hits. In 1985 they made a change in their sound. I can’t blame them- their records had quit selling. They went to a more mainstream sound and for the most part I hated their mid to late 80’s formula hits. The group at least to me lost their originality. They did sell a lot of albums and had great success with their singles. They had 10 Top 40 hits- 7 Top 10 hits and 2 #1’s in the 1985-90 period before listeners got tired of hearing the same formula. These Dreams and Alone were their 2 #1 hits- and I admit to actually liking These Dreams. Alone I didn’t care for at all- so since it was a #1 I will chose it as my Heart formula-song that I hate. It was that or the wordy- All I Wanna Do Is Make Love To You #2- which is just as bad. Heck I will go with both of them as Worst Hits- These songs were so predictable and dull. But they were big hits. 50 Million Elvis Fans Can’t Be Wrong!

Heart didn’t write Alone-by Billy Steinberg and Tom Kelly and it was first released on one of their projects before being recorded by others- before Heart. Later Celine Dion recorded it. Case closed.

In the end I can’t really fault Heart too much- their careers were going in the tank but the formula songs they did were awful then and haven’t held up well. Others who became ‘formula’ acts around the same time- Hall And Oates, ZZ Top, Aerosmith come to mind. Who am I missing?