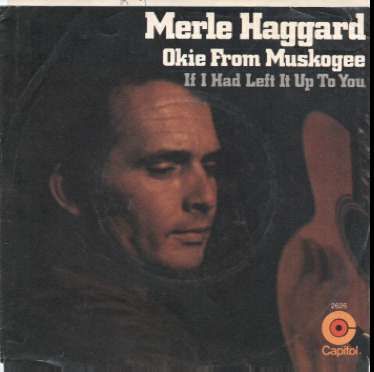 1969 Song of the Day is- Okie From Muskogee by Merle Haggard. The song- which became Merle Haggard’s ‘signature’ song was written by Merle and his drummer Roy Edward Burris. It went to #1 on the US country charts where it stayed for 4 weeks. It just missed making the Billboard Top 40- peaking at #41.  The single and the album of the same name was named the single and album of the year 1970 by the Country Music Association. While is is no doubt Merle’s most famous song -it isn’t even close to being his best.

A controversial song- Haggard said he wrote the song in support of the troops who were over fighting in Vietnam and he had been disheartened by the anti-war protests in the US.  It has also been felt by some that Haggard wrote this redneck anthem as a spoof. They started to write the song when the tour bus had stopped in Muskogee. Later after the song became a hit he went back and performed- and recorded an album live from Muskogee.

The Youngbloods released an answer song- Hippie From Olema.  Olema being a liberal minded city in California.