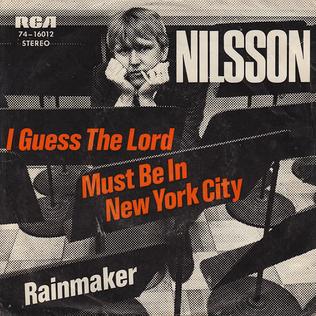 1969 Song of the Day is- “I Guess The Lord Must Be In New York City” by Nilsson. At a 1968 press conference The Beatles when asked who their favorite American band was- answered Nilsson. Harry was a total Beatles freak as it was. Imagine having The Beatles say you were their favorite. Harry Nilsson would become close friends with John Lennon and Ringo Starr. Nilsson was in the early stages of his career at the time The Beatles gave him the plug. His debut had come out only a year earlier.

Harry Nilsson was a great singer-songwriter- who wrote fantastic songs but strangely his two biggest hits were covers of others songs- Everybody’s Talkin’ would gain fame as the theme for Midnight Cowboy- it went to #6 and Without You- a cover of a Badfinger song went to #1 a few years later. “I Guess The Lord Must Be In New York City”-was written for the Midnight Cowboy movie but wasn’t used. It would become his second hit- #34- released after “Everybody’s Talkin’ and is on his album Harry.  This has always been one of my favorite Nilsson singles. It would later be covered by Wayne Newton and in the late 90s by Sinead O’Connor.