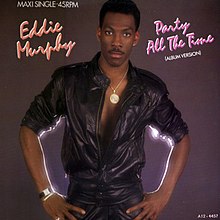 Han’s Worst Hits of the 80’s- today- Party All The Time by Eddie Murphy. Why is it that so many who are great at something- want to be something else? As Harry Callahan once said “A man’s got to know his limitations.” Actors want to be rock stars- rock stars want to be actors. Billionaires who are not well known by the general public like to buy sports teams and think because they are smart and made a fortune in business that they can buy a new toy the team- and run it successfully when they really know nothing about the sport. Eddie Murphy back in the 80’s was a highly successful comedian and actor. That wasn’t enough he had to be a singer too. Or at least try- he wasn’t much of one as this song demonstrates. Incredibly this song reached #2 on the Hot 100 in 1985- only Lionel Richie’s “Say You, Say Me’ kept it from #1. Rick James who was hot at the time wrote, produced and sang on the song- which has to be the only reason it became a hit. Murphy wasn’t much of a singer. He did have one more hit “Put Your Mouth On Me” #27 in 1989. A man’s got to know his limitations.