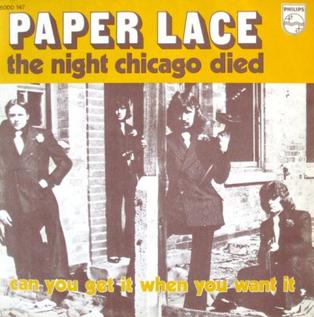 Han’s Worst Hits of the 70’s- goes to that bad bad musical year of 1974 for-“The Night Chicago Died” by Paper Lace. I learned something while researching this song that I didn’t know- in the United States the song “Billy Don’t Be A Hero” was a #1 hit for Bo Donaldson and The Haywoods -but the song was written by two British songwriters Mitch Murray and Peter Callander- and the song was a #1 hit in the United Kingdom by Paper Lace. Paper Lace’s version of the song went unheard in the US. Murray and Callander struck again- when they wrote the follow up hit in the UK for Paper Lace- and the only Top 40 hit Paper Lace would have in the US- a #1- The Night Chicago Died.  So we can blame Murray and Callander for two truly awful #1 songs in the US in 1974.

The song is about a fictionalized shootout between the Chicago police and gangsters under Al Capone. Murray and Callander had never been to Chicago before writing the song- and the events which took place in ‘the east side of Chicago’- was in fact in the 1920’s a quiet residential area. So much for accuracy. The song is one of those to me at least if you hear it once in a while it’s funny- funny bad- if you would hear it- like it was back in the mid 70’s in constant rotation on the radio it was highly annoying.

One thing the song did have going for it- Paper Lace sent a copy to Chicago’s Mayor Richard “Dick” Daley- and Daley predictably hated the song with a passion. Anything that would annoy Daley that much had at least something positive going for it.