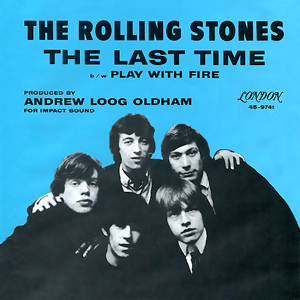 The Rolling Stones Song of the Day is- The Last Time. The Last Time was an a-side of a single- with Play With Fire the b-side. It was released in late February 1965. The Last Time became the 3rd #1 The Rolling Stones had in the UK. In the United States The Last Time peaked at #9 on the Billboard Hot 100. The song was written by Mick and Keith. The Last Time was the first out and out Rock N Roll song to be an a-side for The Stones. Keith said it took eight or nine months to come up with this song. The Stones would perform this song on their mid-60’s tours. The Who recorded and released a single in 1967- The Last Time backed with Under My Thumb- when Mick and Keith were arrested on drug charges-with the goal to help raise money for their bail. This UK only release peaked at #44.  The Andrew Oldham Orchestra recorded the song in 1966 also- and this recording was sampled in 1997 by The Verve in their song “Bitter Sweet Symphony” which brought on a lawsuit from of course the famous scumbag Allen B. Klein-and Klein ended up winning and received 100% of the royalties and the songwriting of The Verve song was changed to Jagger/ Richards/ Ashcroft [the leader of The Verve}