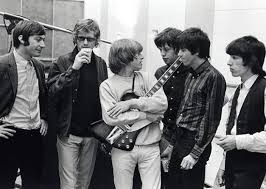 The Rolling Stones Song of the Day is Gotta Get Away. Gotta Get Away was written by Mick Jagger and Keith Richards and is on the Out Of Our Heads album. This song is a giant leap forward as far as the Jagger-Richards songwriting team goes- one of their best up to this point and a sign of things to come. I enjoy the early Stones albums but at this point in their careers if they didn’t step up their songwriting I think their career would have stalled. But as we know they did step up and step up big time.  The song was recorded at the new RCA Studio in Hollywood. Gotta Get Away ended up as the b-side to The Rolling Stones single “As Tears Go By” which was released in late 1965. The guitars of Keith, Brian and Bill Wyman dominate this record. One of the best songs on Out Of Our Heads.