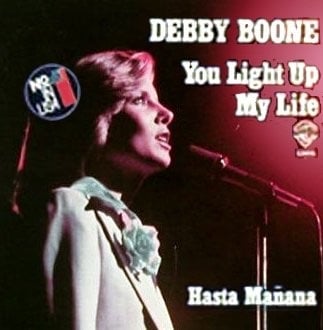 On today’s edition of Han’s Worst Hits Of The 70’s- I know I am being Captain Obvious in selecting the dreadful “You Light Up My Life” by Debby Boone but there are some things I want to write about the song and Debby Boone.

There were 479 different singles that topped the Billboard Hot 100 in the 1970’s and none of those songs I swear were played as often on the radio as You Light Up My Life. You Light Up My Life spent 10 straight weeks at #1 in the fall of 1977- It was #1 from October 15th, 1977 to December 24th of that year when the Bee Gees “How Deep Is Your Love” ended the pain and agony. The 10 weeks at #1 was a Billboard record at the time. On the Record World singles chart it was #1 for 13 weeks. The song won the Grammy for Song of the Year and she won the Grammy for Best New Artist. Back in that time I was in high school and an avid radio listener and follower of the pop charts. You couldn’t turn the radio on- any pop station and not hear this song within 15 minutes.

The song was written by Joe Brooks- who would have a troubled life which ended in 2011 in suicide. The song was originally recorded by Kasey Cisyk for the film “You Light Up My Life.” In the movie the song was lip-synched by Didi Conn. Debby Boone’s version- which took the instrumental track that Brooks had already for the soundtrack- had Boone singing over it. Brooks wrote it as a love song, Boone sang it as a song of inspiration- it was God who lite up her life.

The question I have is- why was Debby Boone a one-hit wonder? On the surface she had a few things going for her that most one-hit wonders don’t have. Her father was the soul-less singer Pat Boone who had a gazillion hits in the 1950s. Well maybe not a gazillion but he had 38 Top 40 hits and sold 45 million records. He was in films. He was still around at this time. The Boone name was established. She was young and pretty. She had one of the biggest hit songs ever- you would think the momentum of that alone would have gotten her another hit. Is it possible she didn’t was because 1- she wasn’t really that great of a singer. Every college/ high school in America at that time and today has a girl who can sing as well as she could or better. 2- Lack of soul ran in her family. This song is music’s version of a vanilla milkshake. 3- The song was overexposed. By January 1978 anyone who did like the song at first probably hated it by then. 4- the late 70s were an era of decadence. We know Debby wasn’t going to the discos at night and doing lines of cocaine in the restrooms there, she was a good girl and that wasn’t IN at the time. If she had been arrested for drunk and disorderly it would have probably given her some street cred in certain circles . I am sure there were other possible reasons why she never had a second hit- and I am perfectly fine that she didn’t. I didn’t hear anyone saying “I wish Debby Boone would make a comeback.” I have also never run into any one who claimed to have liked the song- well my sister was one who bought the single but she was ten years old at the time and can be given a pass. A few years later being reminded that she bought the single would bring embarrassment. I must confess- I have a couple boxes of singles and I am afraid If I went and looked – my sisters copy of You Light Up My Life just might be in one of the boxes. Not that I have ever or would ever play it. I don’t have to play it- its still in my head it was that bad of a song.