The countdown of my 33 Favorite Recording Artists continues- #28- Creedence Clearwater Revival. In compiling this list most of the acts have had long careers- this is one of the few exceptions- Creedence Clearwater Revival released their first album on July 5, 1968 and their seventh and final one on April 11, 1972- their career didn’t last as long as a single presidential term- but what a run they had. They are also a chart oddity- they never had a #1 hit- which is hard to believe but they hold the record for the most #2 hits without making it to #1- they had 5 songs which peaked at #2.

Creedence Clearwater Revival made some excellent albums but I always think of them first as one of the great singles bands. They had 13 Top 40 hits but some of those hits were two sided singles that everyone knows by heart like they do the a-sides- they had 5 double sided hits so to my mind they had 18 Top 40 hits in those four years and most were high on the charts. The thing I love about their hits- are they are short and to the point and the fact that John Fogerty the front man for the group didn’t write love songs. All the hits were written and sung by John Fogerty- except for their first hit- Suzy Q which was a Dale Hawkins song. Every CCR album had at least one cover except for Pendulum which was all John Fogerty. In that 4 year period of time songs were pouring out of John Fogerty. In 1969 the group released 3 albums in ten months.

A lot of bands have had bad break ups but I can’t think of a more acrimonious one than CCR’s- first there was the split between John Fogerty and his brother Tom which happened before the last album. Tom had wanted a bigger role.  The last album Mardi Gras- probably would have been better off not being made. John under pressure from the rest of the group for a larger role- let Stu Cook and Doug Clifford share in the writing, singing and production of the album- I think to just prove a point. John only wrote three of the ten songs and sang on a fourth a cover of Hello Mary Lou. Only a CCR fanatic could name the six songs Cook and Clifford wrote.

The members of the group have continued to feud over the years- Tom Fogerty died in 1990 and John Fogerty famously barred Cook and Clifford from the stage when CCR was inducted into the Rock and Roll  Hall of Fame. They would be high on the ‘bands most unlikely to ever reunite” list. John Fogerty continues to perform and does the CCR hits so what would the purpose be anyway?

As far as Creedence Clearwater Revivals albums -there are seven studio albums I’d recommend all but the final one but if you have six of them you may as well get the final album Mardi Gras. If you just want the hits- the album you want it Chronicle Vol. 1 which has 20 songs and over 67 minutes of music. All the hits are there. A great starting point. 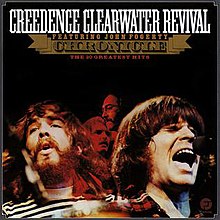