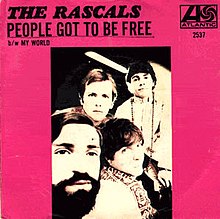 People Got To Be Free was written by Felix Cavaliere and Eddie Brigati of the group and the song about tolerance and freedom was a song that fit the year well. People Got To Be Free was also a hit #14 on the Black Singles Chart. After this song came out The Rascals would only perform in concert if the concert also featured an African-American act. Some believed the song was written as a reaction to the assassinations of Martin Luther King Jr and Robert Kennedy but it was written before the RFK assassination. The song was written in response to where the long-haired band was threatened in Florida after their tour bus broke down.