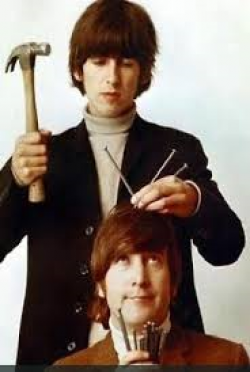 The Beatles Song of the Day is -Maxwell’s Silver Hammer. Maxwell’s Silver Hammer was written by Paul McCartney and appears on side 1 of Abbey Road. This is in my opinion one of the worst songs in The Beatles catalog. Paul viewed it as a potential single but the other three hated it. As author Ian MacDonald wrote in his brilliant Revolution In The Head- ‘the single recording that shows why The Beatles broke up.” Paul insisted on them working and working on this- Ringo has said it was the single worst track they ever had to work on- that the recording went on forever. John and George had similar comments.  My favorite comment is John’s  he described this garbage as “more of Paul’s granny music.’ George said “Sometimes Paul would make us do these really fruity songs. I mean, my God, ‘Maxwell’s Silver Hammer’ was so fruity. After a while we did a good job on it, but when Paul got an idea or an arrangement in his head ..” Paul McCartney: lead and backing vocals, piano, electric guitars, Moog synthesizer: George Harrison: backing vocal, acoustic and lead guitars: six-string bass: Ringo Starr: backing vocals, drums, anvil: George Martin: organ: Produced by George Martin.