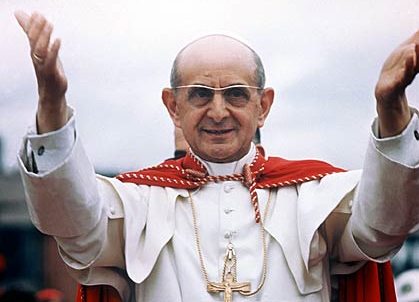 It was forty years ago today- August 6, 1978 Pope Paul VI died at the age of 80. He had been Pope since June 21, 1963. Paul VI died after a massive heart attack. What happened next bordered on the bizarre- the cardinals would gather and they named Albino Luciani as the next Pope- he became Pope John Paul on August 26, 1978. The new Pope was 65 years old. 33 days later I remember waking up and getting ready to go to school and I had the radio on as was my habit- and the DJ said the Pope had died overnight- Didn’t he just die last month? The official line is John Paul aka The Smiling Pope died of a heart attack but there have long been rumours of foul play. Who knows.  Then there was the third pope in a little over 2 1/2 months- John Paul II- who would hang around until 2005- the second longest serving pope in modern history.