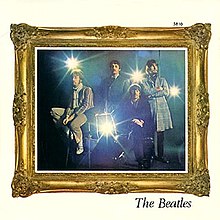 The Beatles Song Of The Day is “Penny Lane.” “Penny Lane” was released as one side of the greatest single of all-time. It was a double A side with “Strawberry Fields Forever” on the other side. Paul McCartney wrote “Penny Lane.” Penny Lane is the name of a street in Liverpool and the area around it. It was called by art critic George Melly ‘a dull suburban shopping centre.” Paul and John though grew up in the area and they had viewed it differently. It was a reminder of their childhood innocence. John when he was writing “In My Life” had tried to get Penny Lane into the song but it would be Paul who would end up writing the song about Penny Lane. Paul would later say the song was ‘ It’s part fact, it’s part nostalgia.” Both “Penny Lane” and “Strawberry Fields Forever” were meant to be on The Beatles next album which was “Sgt.Pepper” but Capital Records was pushing for a double A side single. The song went to the top in America but stalled at number 2 in Britain behind Engelbert Humperdinck’s “Release Me.” The Beatles would do a promotional film for the song. Today we’d call it a video. John Lennon: backing vocal, pianos, guitar, congas and handclaps/ Paul McCartney: vocal, pianos, bass guitars, harmonium, tambourine and effects. George Harrison: backing vocal and guitar/ Ringo Starr: drums and handbell/ George Martin:piano/ Ray Wwinfield, P. Goody, Manny Winters, Dennis Walton: flutes and piccolos/ David Mason, Leon Calvert, Freddy Clayton, Bert Courtley, Duncan Campbell: trumpets and flugelhorn/ Dick Morgan and Mike Winfield: oboes and cor anglais/ Frank Clarke: double-bass. The song was recorded on December 29th,30th,1966 and January 4-6, 9-10, 12th and 17th, 1967 at Abbey Road. Producer: George Martin

One response to “THE BEATLES SONG OF THE DAY- PENNY LANE”