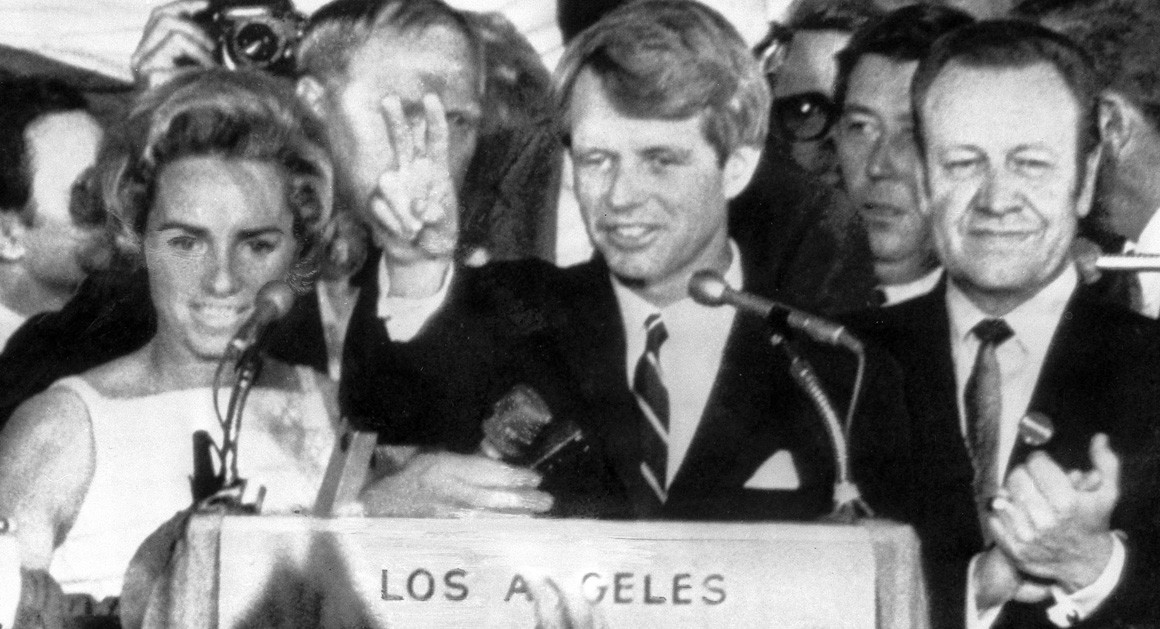 After losing the Oregon Democratic Presidential Primary a week earlier to Wisconsin Senator Eugene McCarthy-Senator Robert F. Kennedy had to win in California to stay a viable candidate. Oregon was a disaster for Kennedy- who in losing became the first Kennedy to lose an election. California seemed on paper to be better suited for a Kennedy victory- for his strength was seen as coming from minorities, poor people and youth.

In 1968 only 14 states held primaries. The way the parties selected their candidates was a lot different than it is today. Back then you could sit out the primaries and announce you were running at the time of the party conventions and still have a chance of winning.

At the end of March the incumbent President Lyndon Baines Johnson had announced he would not seek or accept the Democratic nomination for President- after his poor showing [although he did win } in New Hampshire. Gene McCarthy as the anti-war candidate had received 42% of the vote. Over the years a lot of people have come to forget McCarthy didn’t win New Hampshire. A few weeks after that Robert Kennedy announced that he was now entering the race and would run in some primaries. In April after LBJ announced his intentions not to run- his Vice President Hubert Humphrey threw his hat into the ring -although he wouldn’t compete in the primaries. No one was going to come out of the primaries with the nomination. Today the parties like to go to their conventions with no surprises- the nominee is known going in and they usually announce who the Vice Presidential candidate will be right before the convention- the key no surprises. Back then this wasn’t the case. But if Bobby Kennedy lost California- coming after the loss in Oregon his hopes for gaining the nomination would be very slim.

The reception RFK got in California was that of a rock star. When you see the footage of him on the campaign trail -the people were worked up in such a frenzy it is actually frightening. He was being mobbed in the ghettos and barrios of the cities in California. McCarthy’s strong areas were with the intellectuals and anti-war crowd. The thing about California that also needs pointed out is their primary was winner take all- whoever won won all the delegates from the state.

After the polls closed on Tuesday June 4th and the results started to trickle in- the first results were showing a lead for Senator McCarthy but when the votes from the Los Angeles area started to come in Kennedy surged ahead and won 46% to McCarthy’s 42%. Not a landslide by any means but to win all the delegates all you needed was to win.

After the primaries on June 4- Kennedy would win in South Dakota and McCarthy would win in New Jersey. After the loss in California Senator McCarthy would announce he wasn’t withdrawing from the race. The delegate count after the June 4th primaries- Hubert Humphrey 561, Robert Kennedy 393 and Eugene McCarthy 258. No one at this point was close having enough delegates to win.

Robert Kennedy claimed victory in California, spoke on the phone with Senator George McGovern of South Dakota and was scheduled to address his supporters in Los Angeles at the Ambassador Hotel’s Embassy Room ballroom at 12:10 AM on June 5th.