On this day August 27, 1967- 50 years ago today, Brian Epstein the manager of The Beatles was found dead in his bedroom of what was later determined to be an accidental overdose of barbiturates and alcohol overdose. It was determined he took 5 carbitrals [a sleeping pill which would be banned in England after Epstein’s passing} which was something Brian did often but it was the mix of the pills and alcohol that killed him. Brian Epstein was only 32.

There has been for decades the who is the 5th Beatle debate- to me it has to come down to Brian Epstein and Sir George Martin- they are the two non-Beatles who had the biggest impact on their success. From all reports Brian Epstein came around at exactly the right time for The Beatles. They felt they were getting nowhere in their goals of breaking out of Liverpool. Some believe John and Paul may have been on the verge of giving it up- then along comes Brian Epstein and he throws all his energy into the group and they start to take off.

From what I’ve read [Mark Lewisohn’s book “All Those Years” is the best book on The Beatles and it goes into great detail about Brian and The Beatles} most of the managers of that day were sharks who were out for themselves- Brian Epstein was always trying his best to look out for The Beatles interests first and do what was fair for them. In The Beatles, Brian found his mission in life. Without Brian do The Beatles make it? 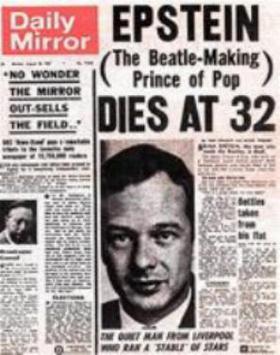