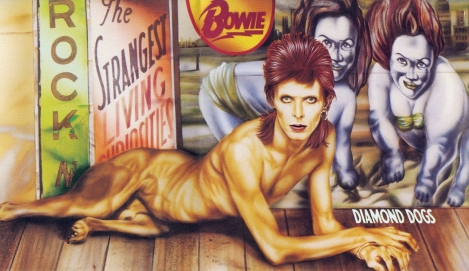 On this date in 1974 David Bowie released his 8th studio album- “Diamond Dogs.” Bowie around this time wanted to do a theatrical production of George Orwell’s “Nineteen Eight-Four” but the Orwell estate denied him the rights. So this album is sort of a Bowie glam rock on one side and the song left over from the Nineteen Eighty-Four project dominated the second side. During the 1970’s-80’s I listened to a lot of album rock radio and I certainly would have thought that songs “Diamond Dogs” and “Rebel Rebel” that we on this album were fairly big hits in the US but they weren’t. “Rebel Rebel” peaked at #64 and “Diamond Dogs’ didn’t even crack the Hot 100.  When you look at Bowie as a singles artist in the US especially in the 70’s it amazes me how many songs I thought were hits- weren’t –but we’re well played on Album Oriented Rock radio. “Diamond Dogs” was a decent album. “Candidate” another stellar song from it.