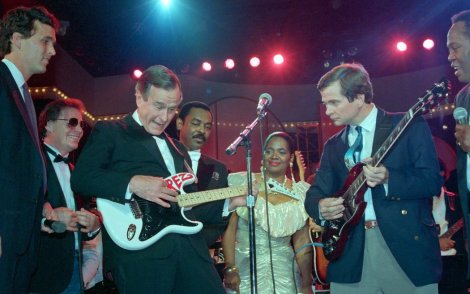 Lee Atwater was born on this day in 1951. He died at the age of 40 in 1991. Lee Atwater is best remembered as an adviser to George H.W. Bush and as the Chairman of the Republican National Committee. He was famous-or infamous depending on your point of view- for his aggressive campaign tactics. He was the manager of Vice President [at the time} George H.W. Bush’s presidential campaign in 1988 and is the mastermind who destroyed Mike Dukakis and his campaign resulting in a rather easy Bush victory. In mid-summer Bush was 17 points behind “The Duke’- in November Bush won 40 of the 50 states. Atwater would throw anything up at the wall and see if it would stick against an opponent. Some of his tactics were questionable maybe based somewhat on facts but twisted a bit or downright lies. Atwater’s goal was to win no matter what the means.

An odd thing about Lee Atwater is that he worked for the Republican Party and it’s candidates but he wasn’t ideological at all. He could have just as easily worked for the Democrats.

On March 5th, 1990 while at a fundraising breakfast  for Senator Phil Gramm, Atwater suffered a seizure. Doctor’s  discovered Atwater had an aggressive form of brain cancer.  He would die a little over a year later on March 29, 1991.

Without Harvey LeRoy Atwater in 1992, President George H.W. Bush ran a lackluster, low-energy campaign. What if Lee Atwater had never gotten sick and was around to run the Bush’92 campaign? I don’t think there would have been a President Clinton for one thing. Clinton was vulnerable and I think Atwater would have had Clinton not knowing whether to cry or wind his watch.