The start of the NFL season is less than a month away now. I love making lists and I love making “Mount Rushmore” lists. I will start at the most important position in the NFL- the Quarterback. There have been a number of great quarterbacks over the years- from Slingin’ Sammy Baugh to Tom Brady. If you got a number of football historians together there would be no one quarterback they would all agree on. {Not like running back where I think most would agree Jim Brown is the GOAT} Even on a Mount Rushmore- there would be some great ones left off. After thinking about this for a long time here are my Mount Rushmore of Greatest Quarterbacks in the history of the National Football League.

#1- #19 Johnny Unitas-  To me it came down to Johnny U. or Joe Cool as my quarterback. I will go with Johnny Unitas. Unitas was the biggest mistake a team ever made- the PIttsburgh Steelers drafted Johnny U. in the 9th round of the 1955 NFL draft. He was a Pittsburgh boy. Maybe it was best for Johnny Unitas to be cut by the Steelers and be picked up by a much better franchise- the Baltimore Colts. Unitas played for the Colts from 1956 to 1972 before finishing his career with the San Diego Chargers. Unitas made 10 Pro-Bowls and led the Colts to 3 NFL Championships. A great leader, he had ice water in his veins. Other quarterbacks have passed him in statistics but the game is played differently today than it was in the  50′ and 60’s. The passing combination of Johnny Unitas to Raymond Berry one of the greatest in NFL history.

#2. Joe Montana. Montana came out of  Notre Dame- drafted in the 3rd round by the 49ers. The 49ers just had one of the worst off season ever [2014-15} but the 1979 off-season was one of the best a team ever had. The great football genius Bill Walsh was hired as head coach and they got Montana in the draft. Three quarterbacks were taken ahead of him. Montana led the 49ers to 4 Super Bowl Championships [matching only Terry Bradshaw and Tom Brady} and was selected to 8 Pro Bowls My favorite Joe Montana story- the 1989 Super Bowl vs Cincinnati. The 49ers down by 3 with 3:20 to go and on their own 8 yard line. Montana says ” There, in the stands standing near the exit ramp-isn’t that John Candy?” Of course the rest is history. Montana led the 49ers to 31 4th quarter comebacks over the years. 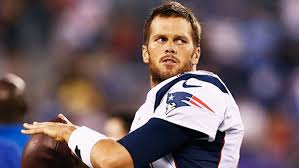 #3 Tom Brady. The top 3 on my list have something in common-they weren’t highly regarded out of college. Teams passed on them. Montana 3rd round, Unitas 9th round, Tom Brady was drafted by New England in the 6th round. You never know. I always have a hard time ranking current players and before he is done maybe Brady will be #1 on my list. 4 Super Bowl Championships, 3 Super Bowl MVP’s, 10 Pro Bowls. He hasn’t over the years had great receivers to work with [the exception being Moss and Gronk} but he makes what he has look great. Still going strong at age 38.

4. John Elway. Elway is the only golden boy on this list. 1983 draft-selected by the Colts-when he refused to go there, he was traded to Denver where he spent his 16 year career. Early on he had a bum rap for losing Super Bowls but honestly the Broncos were not great teams in those years and Elway took them further than they should have by just being in the Super Bowl. Over the years he wasn’t loaded down with great weapons. The best receiver he ever worked with was tight end Shannon Sharpe. 9 Pro Bowls and finally in the last two years of his career he led the Broncos to Super Bowl victories.