The Crystal Palace was built in London in 1851 to house the ‘Great Exhibition’. This was a modular building, and was a very good predecessor of our modern building structures. The building frame was wrought iron, which in the long run is not and was not a great material for building structures with. The key factor on the building however was the glass design. The building was constructed around the style and type of glass. Because they used a common size of glass pane that was easy to produce in large quantites, the cost of the project could be held on the low side.

Basically the building was built in 24×24 foot sections, because of the limitations of the materials. By placing these modules side by side, it gave the building an open floor place with columns spaced throughout.

The building served its purpose for the exhibition, and then went through several iterations over its time. Serving as training areas for the British military for World War I, and serving as the Imperial War Museum for several years after the War. The building was moved from its original location, and fell into decline after the War Museum was moved.

Its final demise came in 1936 when fire destroyed virtually all of the building; a small fire started and was unable to be extinguished. The fire spread quickly through the building. 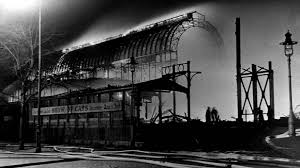