i was/am a huge F1 fan. i have liked almost all of the personalities (read drivers – not so much on ownership) that have been in F1. Senna, Lauda, Hunt, Prost. One of my favorite drivers was Michael Schumacher. The year Ayrton Senna died, was the year that Schumi won his first title for the Camel Benetton team. He won back to back titles with Benetton, before he moved over to Scuderia Ferrari to lead them back to the championships, something that had not happened since Jodi Scheckter won in 1979, if my memory serves.

Schumi won 5 consecutive titles with Ferrari from 2000-2004. He retired for a bit after an accident, then came back to try to help Mercedes return to F1 greatness. He was skiing in December and fell on the slopes, injuring himself badly. He has been in a coma since then.

i saw this story today for the first bid update in a while and the outcome does not look good.

there was no in between on Schumi – he was either liked or not liked. nothing with fans was yeah well he was ok.

all the best sir – you made F1 racing more exciting for me. 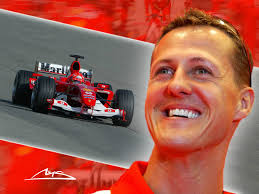