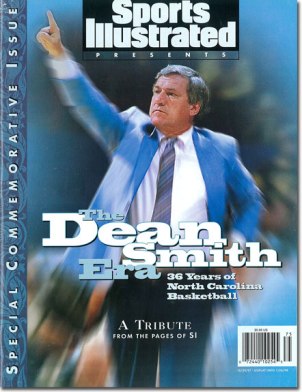 Dean Smith turns 82 today. Dean Smith was the head coach of the North Carolina Tar Heels for 36 seasons from 1961-97. When he retired with 879 victories no coach had more. Dean Smith’s Tar Heels would win 2 National Championships and appeared in 11 Final Fours. If they had a Mount Rushmore for the greatest college basketball coaches of all time there is no doubt Dean Smith would belong there[ along with The Wizard of Westwood-John Wooden, Bobby Knight and Coach K.} If you could find another Dean Smith- you would have the perfect hire for your basketball program. He ran a clean program, his players graduated from college, he won and he never embarrassed himself or his college. The most impressive statistic to me concerning “The Dean of Basketball Coaching” is that 96.6% of his athletes received a college degree. Dean Smith was always a class act.

His Tar Heels won 17 regular season ACC titles and 13 ACC tournament titles. He was ACC Coach of the Year 9 times. His teams appeared in 23 straight NCAA tournaments. He was the coach of the 1976 Olympic Gold Medal team. In his 36 seasons at UNC his teams had a losing record only in his first season.