Rocky Marciano -born Rocco Francis Marchegiano was born on this day in 1923.

1. During his career he had a record of 49-0 with 43 wins by knockout. He is the only Heavyweight Champion of the World who retired unbeaten. Most boxers like all athletes in general have no sense of when it is time to retire. Rocky did.

2. Rocky was born and raised in Brockton, Massachusetts. Both his parents were immigrants from Italy. Another great boxer from Brockton was Marvin Hagler, whose family moved to Brockton when he was a teenager and he took up boxing after moving to Brockton. 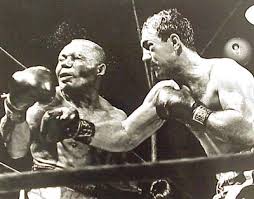 3. The closest Rocky Marciano came to losing was in a fight in 1950 against Roland La Starza, Rocky won a close split decision.

4. Before getting a shot at the Heavyweight Title- the 28 year old Rocky Marciano faced his hero-the aging Brown Bomber- Joe Louis.  Joe Louis had been Rocky’s hero. Rocky knocked out Joe Louis in the 8th round, ending the great career of Joe Louis.

5. Rocky Marciano had a career record of 42-0 when he finally got a shot at the title. He took on World Champion Jersey Joe Walcott in Philadelphia on September 23rd, 1952. Walcott knocked Marciano down in the first round and was winning the first on all the cards when in the 13th round Marciano knocked the 38 year old Walcott out. If Walcott had just survived the last three rounds he would have won the fight, he was that far ahead on all the judges cards. A year later he fought Jersey Joe in a re-match-disposing of him in round 1.

6.Rocky defended his title against the man who had given him his closest fight- Roland La Starza, he knocked La Starza out in round 11.

7. Rocky found former champion Ezzard Charles-two times in a row- the first time Charles went the entire 15 rounds against Rocky becoming the first boxer to do so. Rocky won the decision. In the re-match Charles was knocked out in round 8.

8 Rocky Marciano’s final boxing match was against The Old Mongoose Archie Moore- 38 years old. The fight was held on September 21st at Yankee Stadium. Moore knocked Marciano down in Round 2 but recovered to knock Moore out in Round 9. Rocky Marciano would fight no more, he announced his retirement on April 27, 1956. He had defended his title 6 times. He retired at the young age of 32. Marciano considered a comeback in 1959 but after only one month of training in three years decided against it and never seriously considered fighting again.

9. Some consider Rocky Marciano one of the greatest heavyweights of all time. I beg to differ. It wasn’t his fault, you can only fight who is available during your time. His famous fights were against over the hill, old fighters. Joe Louis, Jersey Joe Walcott, Ezzard Charles was 33. I respect Rocky’s undefeated record as a champ and I admire the fact he had enough sense to retire when he did. Rocky was small 5’10” 185 in his prime. He had a short reach 68″ On the plus side he was always in great condition. He was a powerful puncher. I would rank him in the top 10 of all time but he is nowhere near the guys in the top 5- guys I’d rank ahead of him- Joe Louis, Muhammad Ali, Jack Johnson, Jack Dempsey, Smokin’ Joe Frazier would be my Top 5. Muhammad is my all time favorite athlete but I have to give the nod to Joe Louis as the greatest ever. In his prime Louis would have destroyed Rocky. I think even a Larry Holmes would have beaten him. George Foreman also.

Show me a fighter whose undefeated and I’ll show you a fighter who hasn’t fought
anybody.” –Whitey Bimstein, legendary boxing trainer

10 Sadly, Rocky Marciano died in a small plane crash in Iowa on the eve of his 46th birthday.