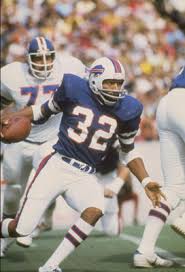 1-If asked who is the greatest college football player I’ve ever seen, I don’t know if it was O.J. Simpson but he’d have to be in the discussion. I remember at age 7 first seeing him play USC-UCLA. He was incredible.

3- His NFL career got off to a disappointing start. It wasn’t until his 4th season that he broke 1000 yards. Then in 1973- The Juice was on the loose. 2003 yards. Other running backs have since topped that mark but its important to remember O.J. did it in a 14 game season, the other running backs had 16 game seasons. O.J was one of the most exciting running backs to watch. I’d put him up there with Gale Sayers and Barry Sanders in the excitement department.

4-One of the greatest signs I’ve ever seen at a game- in Buffalo during O.J’s glory seasons-[he had 5 great years}  “Miami’s Got The Oranges But Buffalo’s Got The Juice”

5- Like most great running backs his window was short. He played 11 seasons but the first three where disappointing. He then had 5 1000 yard seasons in a row. Then he gets hurt his last season in Buffalo. He goes home to finish his career in San Francisco. He was a shadow of himself those two seasons.

6-He went into acting and announcing and he wasn’t good at either of those things. He could be a charming person. At the peak of his football career he was one of america’s most loved athletes. It’s easy to forget that now. He got opportunities after his football career was over because he came across well on tv. Those Hertz commercials with OJ running through the airport were classics.  He was on Monday Night Football for three seasons. I didn’t think he added much insight and he wasn’t a master of the King’s English. He was awful. As an actor-he will be best remembered for his role of Detective Nordberg in the Naked Gun movies.

7- When the news broke that his wife and her friend Ron Goldman were murdered the first thought I had wasn’t “I bet OJ did it” It wasnt long though before I thought he probably did.

8-No doubt in my mind he was guilty of the murders. I think it came down to this. O.J. Simpson since the time he set foot on the USC campus back in the late 1960’s was treated like a king. He had life on scholarship. He was never told no. In this case he was told no. Nicole Brown Simpson was seeing other men and he couldn’t handle it. I think he was stalking her and he saw something that flipped him out. I don’t think O.J was always some evil guy. I think he was like anyone, he had his ups and downs. I think he became insanely jealous and lost it.

9-The “Trial Of The Century” When I think of mid 90’s events that comes to mind right away. As I said I believe OJ is guilty of those murderers. I would bet the majority of people believe that. There are always a few that don’t believe. His trial shows if you have the money and can get the best lawyers behind you that you can get away with murder. OJ got his money’s worth from “The Dream Team” The line of the trial of course was “If it doesn’t fit, you must acquit”.. also helps when the prosecution is run by Marcia Clark and Christopher Darden. The jury though-I think if they had video of OJ committing the act he still walked.

10-The Bronco Ride/ The OJ Letter. I never thought for a second that OJ was going to kill himself.He loves himself far too much. I also don’t know why an innocent man would have written that letter and made that Bronco ride? The ESPN 30 for 30 on that day in sports-was interesting.