Former Oakland Raiders defensive end Ben Davidson dead at 72 from cancer. Davidson was a 3 time AFL All-Star in the late 60’s. He was best known for being huge- 6’8″, his handlebar mustache and for his dirty play [he played for Oakland what could you expect} he was known for his late hits. After his football career was over he did some acting and appeared in one of those Miller Lite commercials featuring former athletes. 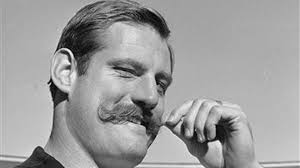