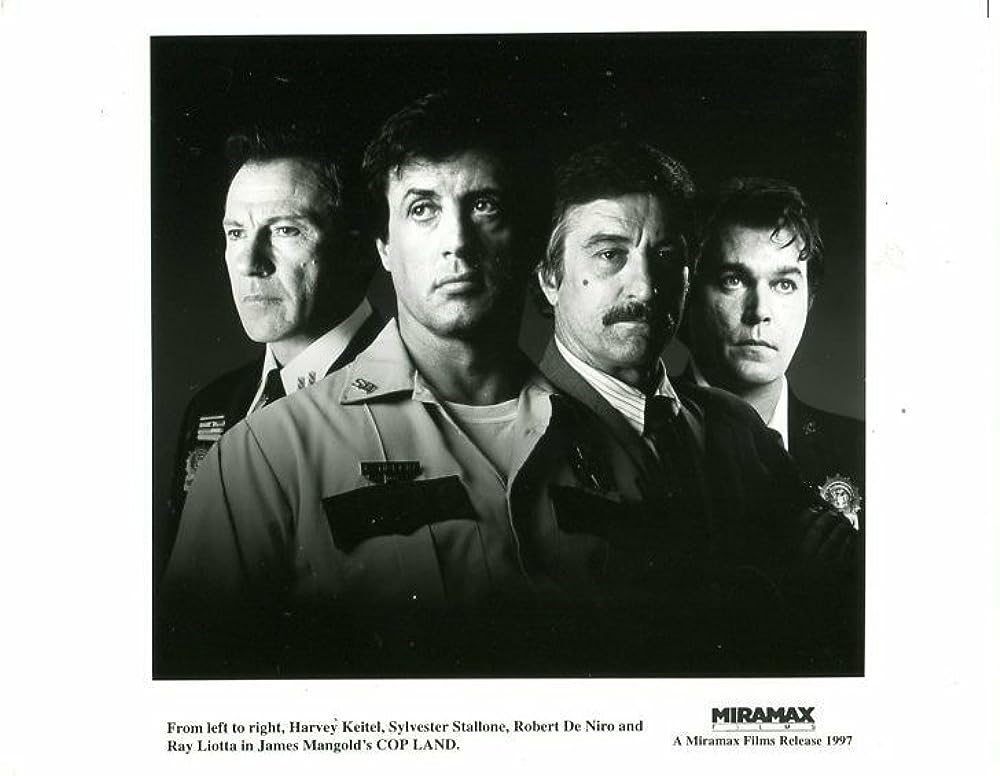 Sylvester Stallone put on 40 pounds to play Nowheresville, N.J., sheriff Freddy Heflin in Cop Land […]. His town is run by Ray Donlan (Keitel) and the other New York cops who have settled there with their families. He wears blinders when it comes to their lawbreaking and mob dealings. Moe Tilden (De Niro), the internal-affairs officer out to get the goods on Cop Land, correctly pegs Freddy as “a man looking for something to do.” Keitel’s [Donlan] exudes dangerous energy. He cares for his own as long as they don’t cross him […]. Robert Patrick brings sly menace to Rucker […]. Ray Liotta […], as Gary Figgis, [is] a tainted cop who sides with Freddy.

Mangold […] has a rare talent for finding the human drama in ordinary lives.

Writer-director James Mangold […] wrangles an impressive cast […] and spins a compelling tale of cancerous corruption among a secretive group of New York’s finest who have settled in the fictional New Jersey burg of Garrison. [Stallone] indeed looks chunky and plays the sleepy, docile Sheriff […] with sluggishness to spare in a largely commendable performance as a half-deaf small-town dreamer. [He] is not given much in the way of memorable dialogue but, he makes the character work […]. [Having] yet to replace his LP of The River with a CD, [he] carries a torch for the local Jersey girl (Sciorra) he saved from drowning…the reason for his loss of hearing in one ear…[he] once longed to be a big-city cop but, had to settle for policing them.

Freddy gradually realizes that he doesn’t like how the town has turned out.

I saw this at the theater when it came out and caught it, again, a few nights ago. I was born and raised in law enforcement and, worked in it, too (non-sworn). I’ve known good cops and I’ve known some really bad ones. I love a well written cop movie and this was an unusual one in that Stallone wasn’t playing a bad ass like Rambo, Cobra, Tango, John Spartan (though I do love that movie) or Ray Quick. This character was different…subdued. His scenes with Annabella Sciorra have Springsteen playing in the background which adds depth and texture to the mood. This is clearly a period piece as all the vehicles, hair cuts and clothing styles are, effectively, early 80s. The River came out in 1980 and music from the Director’s Cut, like Blue Oyster Cult‘s Burnin’ For You came out in 1981. This also manages to cover the Crime category via IMDb and the Film Noir category, simultaneously, via Historical Dictionary of Film Noir (2010). ~Vic

Trivia Bits:
♦ There is a disclaimer at the end of the credits which states “This film is a work of fiction. It is currently illegal for New York City Police officers to live outside the state of New York.”
♦ Arthur J. Nascarella was a real-life NYPD officer.
♦ Debbie Harry acted in the movie but, was edited out in the final cut. She explained on a live television special that although she was cut, she still got paid.
♦ In the scene in which Ray Liotta confronts Robert Patrick in the bar, the dart that Liotta shoves up Patrick’s left nostril was made out of rubber.
♦ Tom Cruise, Tom Hanks, Gary Sinise and John Travolta were considered for Sheriff Freddy Heflin.

The Making of an Urban Western