Remembrance Of Things Past: The Man Who Knew Too Much- Alexander Butterfield testifies before the Senate Watergate Committee- July 16, 1973.  The U.S. Senate’s Watergate Committee hearings were ‘must-see’ television in the late spring- summer of 1973, even for 12 year old Hans. Instead of watching Gilligan’s Island, The Beverly Hillbillies and Gomer Pyle U.S.M.C. I was spending a lot of my summer days watching the testimony concerning the Watergate break-in of June 1972.

Alexander Butterfield’s job at The White House was deputy assistant to the president- the chief assistant to Chief Of Staff H.R. “Bob” Haldeman. As time went on Butterfield became the second most powerful aid in under Nixon in the White House. He would be the one who completely controlled the paperwork which Milhous Nixon saw. In February 1971 Butterfield was told that Nixon wanted a voice-activated audio taping system installed in the Oval Office on the White House telephones. Butterfield worked with the Secret Service to install five hidden microphones in Nixon’s desk in the Oval Office. The taping system was highly secret with only a handful of people knowing about it.

Not every day was full of spell bounding testimony- the two men whose testimonies turned out to be game changing was first the testimony of John Dean who was White House Counsel to Nixon – who testified in June that Nixon was highly involved in the cover-up and mentioned that he suspected White House conversations were taped.

Butterfield was brought in to testify because he was along with Haldeman the one who knew about the president’s day to day behavior. He was brought in on July 13th for a background interview and was asked during this interview by deputy minority counsel Donald Sanders about a taping system in the White House to which Butterfield’s response was “I was wondering if someone would ask that. There is tape in the Oval Office.’ He would disclose that he didn’t want to reveal the taping system but had decided he would disclose it’s existence if asked a direct question. Butterfield gave the details and told them “Everything was taped … as long as the President was in attendance. There was not so much as a hint that something should not be taped. 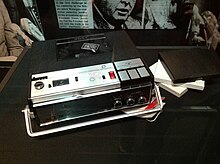 Alexander Butterfield was called in to testify on Monday July 16th before the committee and in all his testimony which was live on all the television networks lasted only 30 minutes but what he had to say- revealing the taping system in the Oval Office was explosive – it was all downhill from there for Richard Milhous Nixon. The tapes proved to be fatal.  Butterfield himself was not involved in the Watergate scandal and was never charged with any crimes. He is still living- he is now 94 years old.

One response to “REMEMBRANCE OF THINGS PAST: THE MAN WHO KNEW TOO MUCH: ALEXANDER BUTTERFIELD TESTIFIES BEFORE THE SENATE WATERGATE COMMITTEE – JULY 16, 1973”