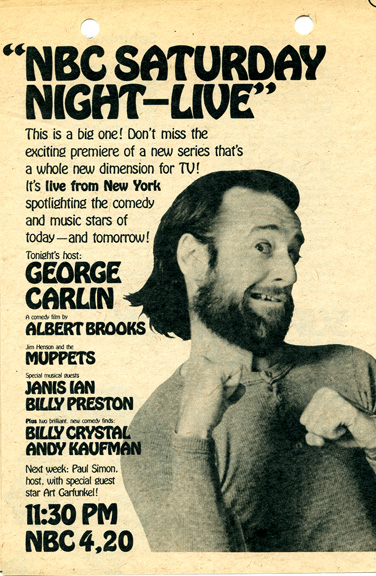 The debut of Saturday Night Live was on October 11, 1975. I am sure at the time NBC would have no idea what they were starting- that 45 years and nearly 900 shows later it would still be going in 2020. The show began in a way because of the King Of Late Night- Johnny Carson. NBC ran re-runs – The Best Of Carson on Saturday and Sunday night and in 1974 Carson asked for that to end. Fearing that continuing to run The Best Of Carson might tick off Johnny and cause him to defect to another network-the network called in Dick Ebersol and told him to develop a 90 minute late-night variety show. Ebersol’s first act was to bring in Lorne Michaels as producer.

The show at first was called NBC’s Saturday Night Live because over at ABC had a show called Saturday Night Live with Howard Cosell. The first episode was hosted by the great comedian George Carlin. The cast for Season 1- The Not Ready For Prime Time Players-included Dan Aykroyd, John Belushi, Chevy Chase, Jane Curtin, Garrett Morris, Laraine Newman and Gilda Radner. The show would feature musical guests each week and for the debut show Billy Preston performed “Nothing From Nothing”and “Fancy Lady”- and Janis Ian did her hit “At Seventeen” and “In The Winter.” Also on the show the comedic genius Andy Kaufman appeared playing the Mighty Mouse theme on a record player.

Over the years Saturday Night Live has launched a number of careers- in year 1 the cast member that got the most attention was Chevy Chase and he left after the first season and went on to a successful movie career.

The first season of Saturday Night Live had 24 episodes and had a 6.4 rating. The ratings would sky rocket in the late 70’s and early 80’s-peaking at 13.5 in the 5th season 1979-80. The first five seasons have been released on DVD. I didn’t see the first episode as it happened- but caught on to the show a few episodes in and it was one television show that I had to see every week- until the mid-80’s. It’s been years since I’ve watched it. To me it quit being funny.

10 responses to “REMEMBRANCE OF THINGS PAST: THE DEBUT OF SATURDAY NIGHT LIVE -OCTOBER 11, 1975”