As a youngster growing up in the 1970’s my main sports were[ and still are ] baseball and football but I also had an interest in the NBA and NHL. Thing was my local city Pittsburgh didn’t have a team – and probably never will so my exposure to NBA basketball was once a week on a Sunday afternoon when a Game of the Week would be on television. I would listen to Cleveland and Boston games on the radio during the winter but my actually seeing games very limited. Once Sunday for some reason on the Game of the Week they had the Seattle Supersonics on and the player that got my attention was a guard named Slick Watts. Watt’s shaved his head and had an off-centered headband around his head. Today Slick wouldn’t stand out- he was ahead of his time. There were balding players in the league but until Michael Jordan came along and made it cool- I can’t recall any players who just flat out shaved their head- and the headband added some style. Slick Watts wasn’t drafted by the NBA coming out of college but got a try out with Seattle due to his cousin- the great Bill Russell was the Supersonics head coach at the time. Watts played seven seasons and lead the league in steals and assists in 1976 and was on the first team- All-Defensive Team that season. Slick Watts was above all COOL! While I didn’t shave my head then- I was a teenager and had a full head of hair- I did get a headband like Slick had. 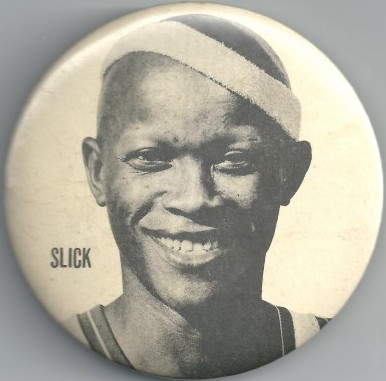 3 responses to “REMEMBRANCE OF THINGS PAST: THE NBA IN THE 1970’S- DONALD “SLICK” WATTS”