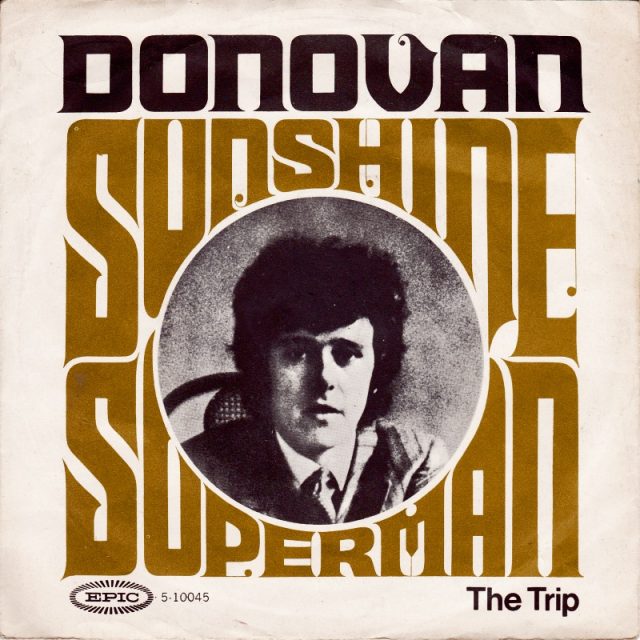 Donovan was only 19 years old in 1965 when he recorded “Sunshine Superman.” Donovan Leitch born in Scotland- had already had 1 Top 40 hit in the US “Catch The Wind” and 3 Top 5 hits in the UK when “Sunshine Superman” was released. It would be his only #1 in the US- in the UK- the single due to contractual issues wasn’t released until December 1966- and he never had a #1 in the UK- he did have 8 Top 10’s.

In the mid to late 60’s Donovan seemed to be here, there and everywhere. He hung around with The Beatles, The Rolling Stones and Bob Dylan. He taught John Lennon the finger-picking guitar style. He went to India with The Beatles on that Maharishi. He was the first high profile rock star arrested for pot in England.  At a press conference a reporter asked Bob about Donovan “Do you think he’s a good poet?” and Bob answered “Neh, but he’s a nice guy.”  Donovan wrote “Sunshine Superman” for Linda Lawrence- ex girlfriend of The Rolling Stones  Brian Jones. Donovan dated her for a little while and still liked her. He thought if he wrote her this song she’d realize they should be together. It didn’t work at the time-he married someone else and had a few kids. Then a few years later a friend set Donovan and Linda up again. This time they fell in love and have been married ever since.