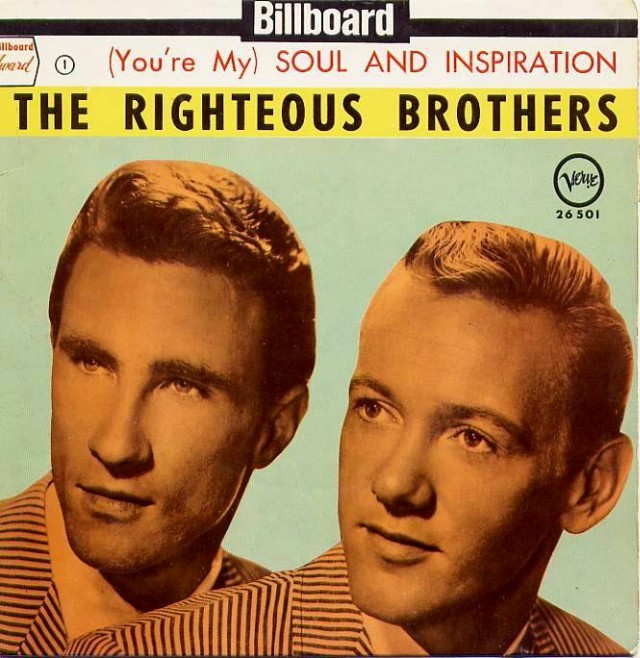 Even though they had enjoyed success working with the legendary producer Phil Spector- and had the previous year went to #1 with Phil producing “You’ve Lost That Lovin’ Feelin'”- a little bit of Phil they found as others had- goes a long way. They had learned the game from Phil- so they left and went on their own- with Righteous Brother Bill Medley producing this- their second #1 and first hit without Spector. Spector sued Verve their new label and won hundreds of thousands of dollars. After the songwriting team of Mann and Weil had hit with them on “You’ve Lost That Lovin’ Feelin”- they began working on another song for The Righteous Brothers but they thought “Soul And Inspiration” sounded too much like “Lovin’ Feelin” and put it aside. When they went to Verve Medley asked Mann and Weil to finish it and then went about making the record sound as much like a Phil Spector record as possible. He succeeded- until researching this I had always assumed this was another Spector production. Medley even brought in some of The Wrecking Crew who worked for Phil Spector. The single even spent more time at #1 then “You’ve Lost That Lovin’ Feelin'”- 3 weeks to 2- although as good as it is- it’s no “You’ve Lost That Lovin’ Feelin’.” The Righteous Brothers would only have one more Top 10 hit in their career – “Rock And Roll Heaven” #3 in 1973.