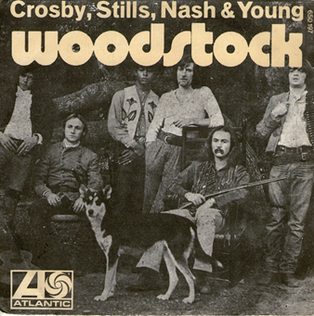 There were three versions of “Woodstock” released in 1970- first the original written by Joni Mitchell- it was the b-side of her “Big Yellow Taxi” single – and released on her Ladies Of The Canyon album. Then Crosby, Stills, Nash and Young- recorded it – after learning the song from Mitchell’s boyfriend at the time Graham Nash. Stephen Stills sings the lead on the song- and CSNY transform the song into more of a rock song that Mitchell’s original. The third version was done by Matthews Southern Comfort and it peaked at #23 on the Billboard Hot 100.