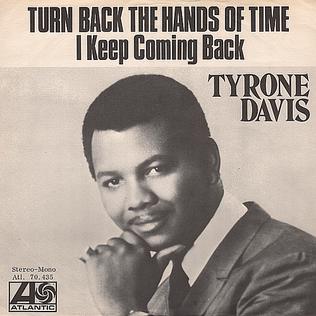 Tyrone Davis was an R&B singer from Greenville, Mississippi. This was hit biggest hit. Overall he had 15 Hot 100 singles and 5 Top 40 singles. “Turn Back The Hands Of Time” was written by Daniels and Thompson about relationship problems that Daniels was having at that time. Singing back up on the song Eugene Record of The Chi-Lites.  It went to #1 on the R&B Singles chart. Tyrone Davis died of a stroke at the age of 66 in 2005.