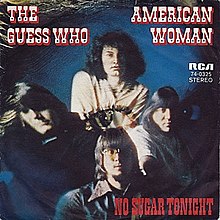 This single which went to #1- came about on stage- Randy Bachman was playing notes while tuning his guitar after replacing a broken string- and came up with the riff. It turned into a jam session with the band improvising the lyrics. The lyrics have been a subject of debate- some believing it was about American politics. Burton Cummings who wrote the lyrics decades later said “What was on my mind was that girls in the States seemed to get older quicker than our girls and that made them, well, dangerous. When I said ‘American woman, stay away from me,’ I really meant ‘Canadian woman, I prefer you.’ It was all a happy accident.” Bachman would also call it an anti-war protest song. In the summer of 1970 The Guess Who would play at the Nixon White House- First Lady Pat Nixon requested that the band not play “American Woman” since it was perceived as being anti- American.