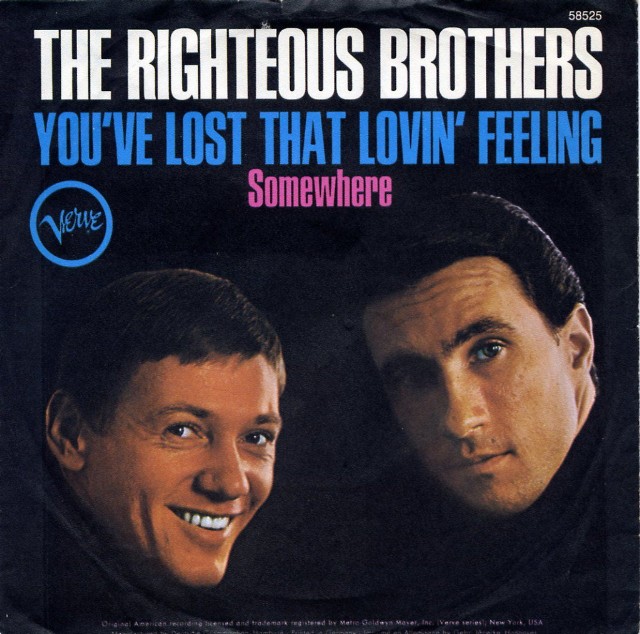 In December 1999 BMI -Broadcast Music Inc- ranked this song as the most played song on the radio and television in the 20th century. If “You’ve Lost That Lovin’ Feelin”- isn’t the greatest pop single ever made – it is surely on the short list. Written by the writing team of Mann and Weil- with Phil Spector. It was produced by a Phil Spector who was still in his prime in the mid-60’s- it may have been Spector’s finest work. I love the production and the vocals by The Righteous Brothers. The Righteous Brothers were the first white vocal group that Spector had worked with.  Rolling Stone ranked it at #34 on their 500 Greatest Songs Ever list- and I think that is too low a ranking- it has to be in the Top 10 if not higher! I have heard this song hundreds of times and every time I hear it it has my total attention.  The actual recording of the song took 39 takes-and eight hours over two days.  Note- the background singers were mainly the vocal group The Blossoms- and joining in the songs crescendo- a young woman named Cher. Brian Wilson who was a Phil Spector “Wall of Sound” fanatic- when he heard the single called Mann and Weil and said “”Your song is the greatest record ever. I was ready to quit the music business, but this has inspired me to write again.” Can there be higher praise? The song has been covered many times over the years- Hall And Oates had a major hit with it in the early 80’s but no one is going to be able to touch the original.