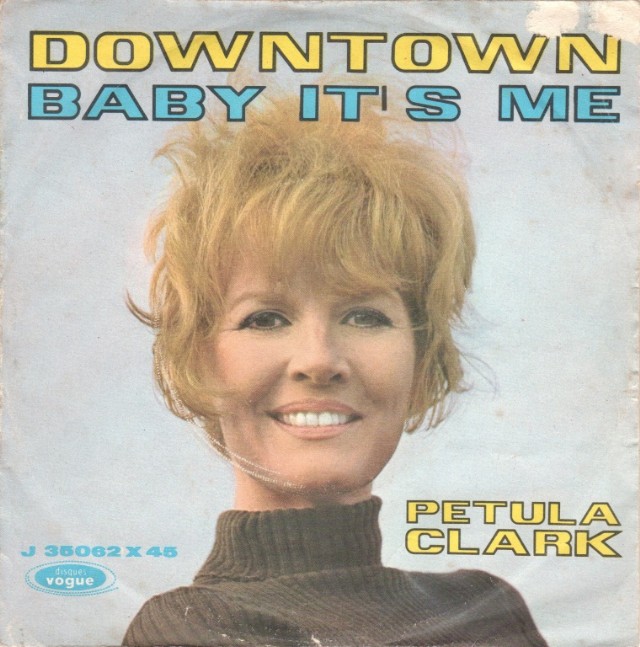 Petula Clark has had a very long career- it began on the radio when she was 9 and then  in 1944 she made her first film as an actress. She was in a couple dozen movies into the early 1980’s. Her most notable movie was Goodbye Mister Chips.  She had a television series in the UK in 1950. As a recording artist she released her first album in the mid 1950’s when she was in her mid-20’s. She had a handful of hits in the UK but nothing made a dent in the US charts until 1964 and her first US hit- which went to #1 “Downtown.” She was 31 when “Downtown” hit. Today she is 87 and still active. So she had been active in the entertainment industry since the early days of World War II– or The Great Patriotic War as our Russian comrades would call it.

“Downtown” was the third single to hit #1 in 1965 but the first two were carry overs from 1964- The Beatles “I Feel Fine” spent a few weeks at #1 at the end of 64 and into 65- then after being out of the #1 spot for 3 weeks The Supremes made a Joe Biden like comeback- and returned to #1 for a week. “Downtown” was written by songwriter- producer Tony Hatch. He was inspired to write the song by his first visit to New York City in 1964. He was in town searching for material from publishing companies for his artists. He wondered down to Broadway and Times Square and loved the atmosphere. He thought he was in downtown. He would meet with Clark in the fall and presented her a few songs -she wasn’t enthusiastic about any of them- and ask if he had written anything. He had started “Downtown” even unfinished Clark liked it and told Hatch to get that finished. He did and she recorded it. When released as a single it took only 6 weeks to get to #1. Clark went on to have 15 straight singles make the Top 40 from 68- then her next 7 made the Hot 100 but fell short of the Top 40. She did have one other #1 hit- “My Love” in 1965 but “Downtown” is without question her signature song.  In 2011 she sang a few lines on the Irish rock band The Saw Doctor’s version of “Downtown”