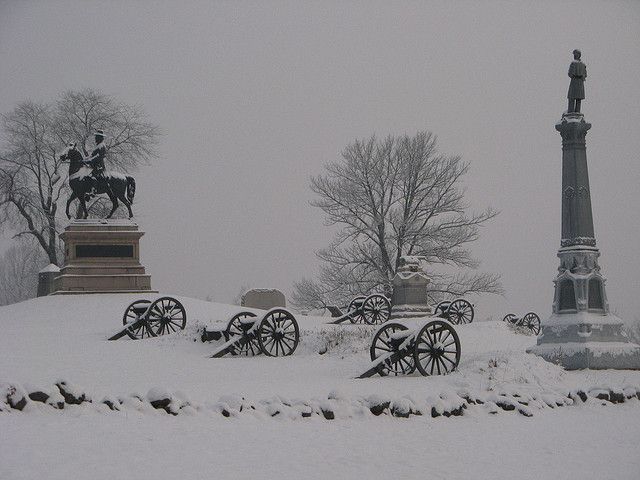 Things To Do In Gettysburg- Part 3: Gettysburg In Winter:

Until two weekends ago- we had never been to Gettysburg in December or January. There are a few pluses going to Gettysburg in the winter- 1- there are no crowds so you have the place pretty much to yourself, a handful of fellow travelers and the local folks. 2- The hotel prices are as low as you will ever find them in Gettysburg for a weekend.

Now you never know about the weather in the winter. A couple weekends ago it was cold and windy but there was no snow. Planning a trip to Gettysburg in the winter you need to keep an eye on the forecast. We had planned on going the weekend before we did- but when I saw early in the week that snow/ice was expected over the upcoming weekend we changed our plans. Turned out to be a good move- the weather that weekend was bad.

National Park Service rangers and leading historians from across the country offer free hour-long talks exploring important aspects of the American Civil War and the Battle of Gettysburg.

Free tickets will be distributed from the theater podium beginning at 9 am on the day of the lecture. Doors open at noon.

Select presentations may be filmed for inclusion on the park YouTube channel. Check the park’s social media platforms for updates.
Gettysburg National Military Park Museum and Visitor Center.
Saturdays and Sundays at 1:30 pm.
These programs are free of charge.
Limited seating is available on a first come – first serve basis.
Schedule is subject to change.

Sat. January 18 – Historian Codie Eash ~ Pray for Oblivion to His Memory: Frederick Douglass on the Legacy of Robert E. Lee
** Due to inclement weather, this lecture was cancelled but is rescheduled for Saturday, March 28. **

Sat. January 25 – Ranger Steve Phan ~ The Defenses of Washington during the Gettysburg Campaign

Sun. February 9 – Ranger John Hoptak ~ “With Eagles on their Buttons and Bullets in their Pockets:” South-Central Pennsylvanians in the 54th Massachusetts Infantry

Sun. February 16 – Ranger John Nicholas ~ What you don’t know can hurt you: The Information War and the Gettysburg Campaign

Sat. February 22 – Ranger Tom Holbrook ~ If These Things Could Talk: Treasures from the Collection of Gettysburg National Military Park

Sat. March 28 – Historian Codie Eash ~ Pray for Oblivion to His Memory: Frederick Douglass on the Legacy of Robert E. Lee

Also every Sunday night at the Farnsworth House- Licensed Battlefield Guide and the Adams Country Historical Societies Historian- Tim Smith gives a talk on a different subject every week. The Sunday we were there- he gave a talk about Jennie Wade the only civilian who was killed during the battle. We have gone on a couple battlefield tours in the past with Tim and he’s great at what he does. I just wish his Sunday talks were on the internet. 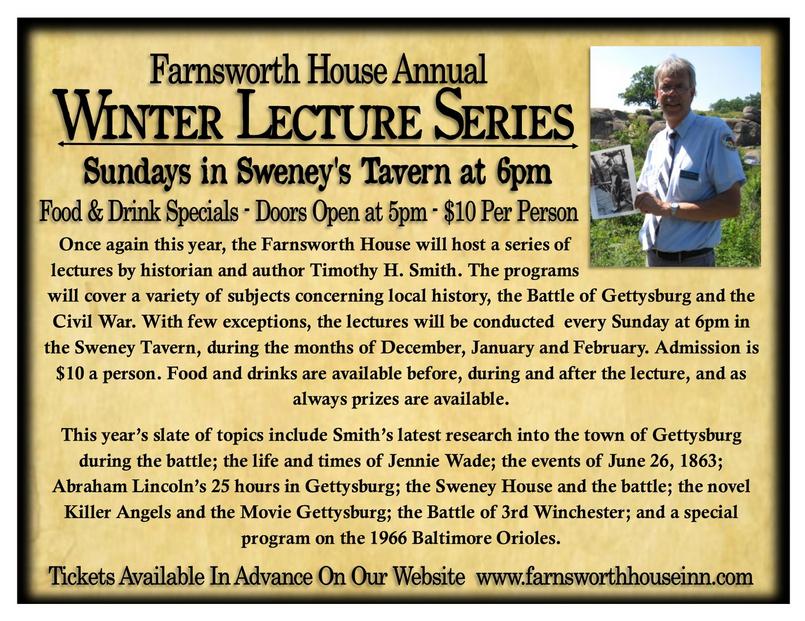 In December there is a Gettysburg Christmas Festival – I have never been to it but below is a link that gives some info on what they have going on at the festival if that is what you are into.

5 responses to “THINGS TO DO IN GETTYSBURG: PART 3: GETTYSBURG IN WINTER”