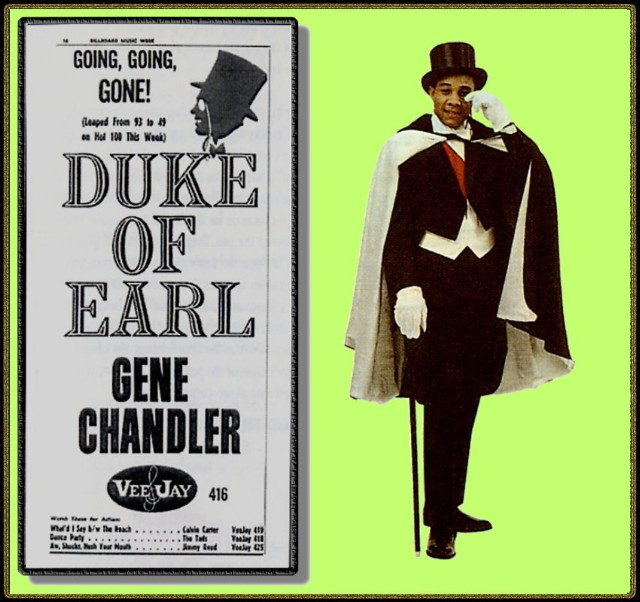 “The Duke Of Earl” would be Gene Chandler’s first and biggest hit and he would take the title of the song and make it his nickname. Chandler was born in Chicago in 1940 as Eugene Dixon but took the last name Chandler from his favorite movie Jeff Chandler. As a teenager he joined a neighborhood singing group The Dukays. He joined the U.S. Army from 1957-60 and when he got out joined back up with The Dukays.

“Duke Of Earl” started out as just a vocal warm up for The Dukays and it grew from there. The song was recorded but groups record company released another song “Nite Owl” as the single. They gave Chandler the offer to release “Duke Of Earl” under his own name. All of The Dukays sing on the recording but it was listed as a Gene Chandler song. Lyrically the song is mostly nonsense but is is great sounding nonsense. It was at this point where Eugene Dixon became Gene Chandler. In concert when singing “The Duke Of Earl” Chandler would wear a cape, top hat and monocle. “Duke Of Earl” quickly made a run up the charts -to #1 on both the Billboard Pop Hot 100 and on the Billboard R&B Singles Chart.Chandler would go on to have 25 Hot 100 hits with 6 making the Top 40.

“Duke Of Earl” has been covered numerous times over the years both on record and in concert. Sha Na Na played it at Woodstock. The go-to version is still the original. The Rock and Roll Hall of Fame listed it among the 500 Songs That Shaped Rock and Roll. Gene Chandler is now 82 years old.